The past two months have been a confusing time for Bitcoin investors. The cryptocurrency has traded between a rock and a hard place, barely deviating from the range lows of $8,500 and the highs of $10,000.

BTC is so indecisive that analysts have noted that a textbook volatility indicator has reached multi-month lows. Citing other indicators, others have argued that volatility is even at multi-year lows.

The Bitcoin bull case recently gained strength with an unexpected observation from a cryptocurrency technician.

Over the past few years, the Grayscale Bitcoin Trust (GBTC) has become increasingly important to the crypto market. Latest data suggests that Grayscale now holds around two percent of all Bitcoin in circulation. This is a figure that increases every few weeks as the firm continues to raise capital.

According to one trader, the investment vehicle has become so important that it may be signaling points at which BTC bottoms.

Because GBTC cannot be directly redeemed for BTC, there is a premium between the trust’s shares and the value of coins that backs the trust. The premium may indicate when Bitcoin bottoms, the trader suggested.

He shared the image below, which shows Bitcoin’s macro price action in relation to the premium of the trust over the spot price of Bitcoin. Whenever the premium is low, BTC seemingly bottoms out:

“This guy wrote an interesting thread about GBTC and pointed out that the GBTC premium seems to always be low when $BTC bottoms out. It looks like it’s true. Premium is always higher when market goes parabolic, premium is low when market bottoms out.”

Last time the premium was this low was in December 2018, when Bitcoin bottomed at $3,200. The cryptocurrency rallied 300% in the six months that followed.

The premium also saw a strong dip during the crash to $3,700, though it didn’t drop as far as it has now.

Tangentially related to the analyst’s observation, Grayscale has reported extremely strong inflows over recent months. This may signal to the market that long-term investors are accumulating.

As reported by technology analyst Kevin Rooke, Grayscale added 19,879 BTC to its Bitcoin Trust in a single week while miners produced 7,081 coins. 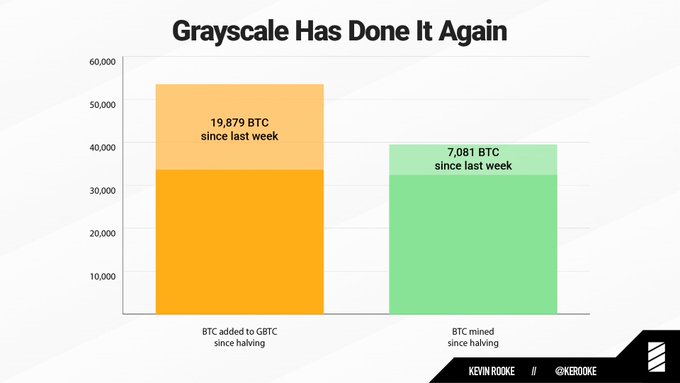 Ethereum Price Rejected At The…

Why This New NFT Integration…